Like most midwives, I’d spent years thinking about my own birth. I wanted an easy (lol), calm, and empowering birth at home or in a birth centre. I didn’t want to use drugs, or have any kind of medical intervention. I knew it was going to be challenging, but I’d seen so many women do it before.

At 40+3 weeks I decided to take things into my own hands and get this show on the road. My Virgo, perfectionist personality didn’t want a bar of my impending induction date. Id already done most of the induction things that women drive themselves insane doing to try and bring on labour naturally; acupuncture, curry, dates, sex, raspberry leaf tea tablets, long walks, stairs, self hypnosis, and four weeks of hand expressing colostrum. I’d had a few stretch and sweeps from my MGP midwife and the look on her face told me my cervix showing no signs of preparing itself to open up (posterior, high, hard, barely admits a finger – depressing to say the least).

So I decided to try rubbing my nipples as a last ditch attempt to bring things on naturally. I couldn’t believe how effective it was. My tummy would go rock hard and actually start to contract. Hilarious and miraculous. That night I went to bed and knew I was going into labour. My waters broke in bed and I swear I heard them pop like they do in the movies. I was so excited and also had no idea what to do because I couldn’t stop laughing.

I remembered what I tell women to do when their waters break and I put on a pad and rang my midwife. All was going well. Until I rechecked my pad and realised my waters had a slight hint of green to them. My heart sank. I took a pic and sent it to my bestie Rosie (also a midwife, mum of two, aka Winnie Wagtail – what a woman). She replied straight away and confirmed my waters were mec stained. My baby had done her first poo and literally shat all over my home birth / birth centre plans. I called my midwife and we headed into the hospital. I had a VE in women’s assessment and my midwife confirmed that my cervix had still not made it to the party and was only 1cm. I was disheartened but tried to stay positive.

We got admitted to a delivery suite room with a bath and Stefan started setting up the room like all good hypnobirthing partners do. He turned the lights down, plugged in my Himalayan salt lamp and put my diffuser on. By this stage I was connected to a CTG and had my TENs machine working overtime. My contractions were amping up and my hypnobirthing affirmations were making me more and more furious. I knew I needed to calm down and try and stay in control but things were starting to feel more and more out of control. After a couple of hours of this i asked my midwife to check my progress. I thought maybe I was progressing so quickly that I was already transitioning and that’s why I felt so hysterical. Wrong. My cervix was still fast asleep. I ordered an epidural immediately. My baby was still posterior (as she has been the entire pregnancy), my back was in agony from her position and the parting words from my last ultrasound rang in my ears “your baby has a large cranium”.

My midwife Hannah rang the anaesthetic team and let them know I was requesting their assistance. When she hung up she started running me a bath. This was bad news. The anaesthetists were tied up in theatre with an emergency cesarean and the fact that Hannah was preparing me a bath meant they weren’t coming anytime soon. When you’ve spent hours trying to deal with the pain of labour on your own and finally decide to have a EDB, you want it immediately. Not in 10, 20 or 60 minutes later. I begged Hannah to tell me how long they’d be (which is ridiculous because I knew her guess was as good as mine). After 2 hours of thrashing around in the bath like a whale at a nightclub, and a second unexpected emergency cesarean for an undiagnosed breech delivery in labour ward (which delayed the anaesthetists once again), the consultant anaesthetist was called in from home. I demanded to know where she lived and how long it would take her to drive to the hospital. Hannah said she’d be about 20 minutes.

When the anaesthetist finally arrived I waddled across the room and threw myself on the bed. I yelled at her I knew the risks and didn’t care about any of them (if you’re reading this, my sincere apologies). The epidural was the best decision I’d ever made, I was beyond thrilled (if you’re planning a hypnobirth please don’t let this deter you – this was just my experience). After 30 minutes of lying flat on my back to make the anaesthetic disperse evenly (an almost impossible task when you’re in labour), I was finally comfortable. Stefan immediately fell asleep and I convinced myself that I could now have a Kourtney Kardashian style birth (calm, epidural insitu and pulling my baby out of my vagina with my own two hands).

In the end I didn’t get my KUWTK style birth either. After 18 hours of contractions, syntocinon, vaginal examinations, a tachycardic CTG, and terrible jokes from my family who had arrived to lift our spirits, my cervix had only made it to 3cm. We decided to call it what it was (obstructed labour, failure to progress, fetal distress, and whatever other unsavoury terms you can think of) and headed to theatre for an emergency cesarean. I say “we” because my midwife and the obstetricians who were involved talked us through everything. In the end it was me who made the call to go to theatre two hours before they said we had to. I’d seen my situation play out before, my baby wasn’t happy, my cervix was as flexible as my birth plan (not at all) and I saw no point in carrying on for the sake of pushing my baby and body to its limits.

So we headed off to theatre and it was horrific and beautiful all at the same time. I found it hard because as a midwife who had spent a lot of time in theatre receiving babies, I knew exactly what they were up to on the other side of the blue sheet. I knew which instruments were being used when and what bits they were pulling on and tearing.

On one hand I was scared and felt really out of control. But on the other hand it had all the elements of a birth I’d wanted, beautiful music (Neil Young’s Harvest Moon), my partner by my side, a baby whose lungs opened and worked as they were meant to when she took her first breath, and a supportive birthing team (the theatre staff really stepped up and proved themselves as a great substitutes to my family who were waiting back in the delivery suite). So while it wasn’t everything I had imagined (a spontaneous drug free BBA in the bath at home), it was still the best day of my life. 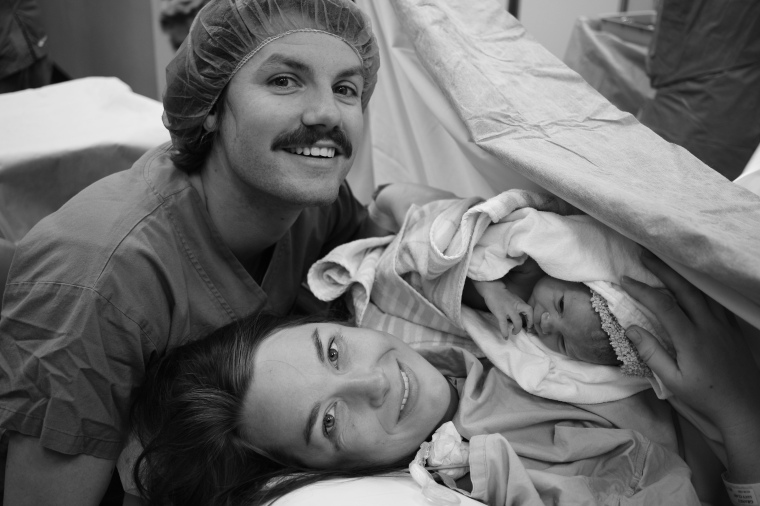